Tiles by This Manufacturer in Blogs 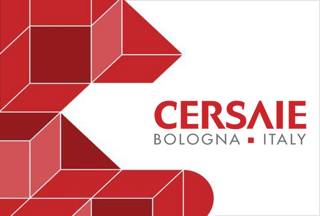 Cersaie 2017 at a Glance. New Tile Arrivals and Trends Not to Miss

From the 25th of September, Bologna is hosting Cersaie 2017 ceramic tile exhibition. This is the 35th edition of the event attended by more than 800 visitors from 43 countries from all over the globe. Traditionally, Cersaie brings together the most influential industry professionals — tile producers, retailers, architects, artists, raw material and component suppliers. The central exhibit is accompanied by the versatile themed events, conferences, workshops. The expo poster image, like every

On September 26-30, Italy will host Cersaie 2016, the pivotal event of the European ceramic tile industry. Traditionally, the exhibition will be held in Bologna to gather together the companies from more than 40 countries. Of course, the number of visitors will be even greater. In 2015, the event welcomed more than 100 thou attendees from 170 countries. Staying at the heart of it all, we will bring to your attention live reports onsite, share the photos of the manufacturers' stands and highlight 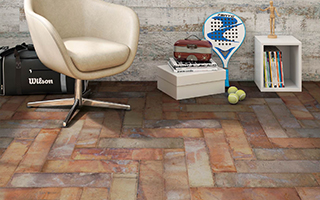 The Novelties of Cevisama 2016

In February, Valencia hosted the annual Cevisama event, which is rightfully regarded the key venue and the major trend-setter for the Spanish brands throughout the year ahead. We would like to offer a brief overview of the exhibition, outlining the dominating development paths of the ceramic tile industry. Noteworthy, the popularity of the brick-effect tile keeps growing along with the expansion of the Italian tile market. The faux-wood, concrete-effect tile and patchwork items remain among the 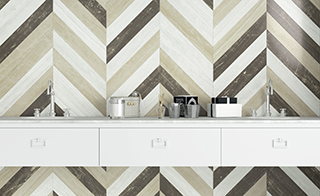 It is of great interest that the chevron pattern, being as old as the hills, is commonly encountered in contemporary design. The first zigzag elements occur on pottery in Ancient Greece. The modern denomination emerged later. It was derived from the system of insignia used with reference to the military ranks. A chevron is a combination of zigzags or V-shaped elements, which differ in color and/or thickness. Today, the popularity of chevrons is largely contributed by the Italian fashion house

Preview and LIVE Report from Cersaie 2015

On September 28, 2015, Bologna (Italy) is going to host Cersaie 2015, the major international event in the world of ceramic tile. The key market players are ready to unveil their brand-new collections and, in doing so, to anticipate the hottest industry trends for 2016. Starting from September 29, we will be continuously updating you on Cersaie progress, presenting for your attention the LIVE coverage of exhibitors and sharing our first impressions. What is more, you may follow our online

Traditionally, we are pleased to present them here. Cersaie is the key annual event in the world of ceramic tile. The manufacturers broaden their portfolio seeking to distinguish themselves with something extraordinary. It is up to our readers to make their own judgment. We would like to bring to your attention the review of the breakthrough tile series with photos, our insights and official presentation of manufacturers. The trade show kicks off on September 22. In expectation of this moment,